skip to main | skip to sidebar

I love my clients! I don't know how I've become so lucky, but I get to work with some of the best people!

Recently, a cupcake order was placed by an out-of-town client for her friend's birthday (who lives here in Myrtle Beach.) A dozen Lemon Raspberry Cupcakes with a Cheesecake Filling was her pick...at the surprise delivery, I told the birthday boy which flavor he was receiving and he looked stunned! "Those are all my favorite things!" he replied with a look of confusion and heavy thought. He was trying so hard to figure out who the sender was...I have a lot fun with surprise deliveries!

The secret sender sent some feedback today via email: 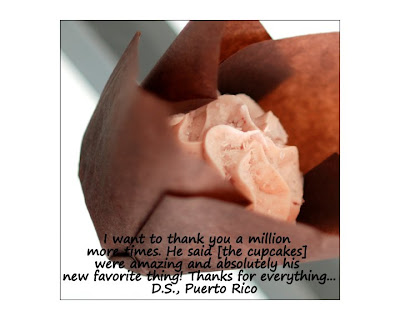 Sweet little notes like this one just makes my day! I love my job!
Jade Cahoon
Sweet Street Designer Cakes and Cupcakes

Posted by Jade Cahoon at 15:35 0 comments Links to this post 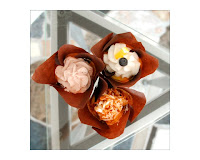 My favorite flavor of all time is lemon! From a slice of lemon in my tea to fresh lemon meringue pie...I just heart everything tart & sweet!

Here is a look at my lemon cupcake line: 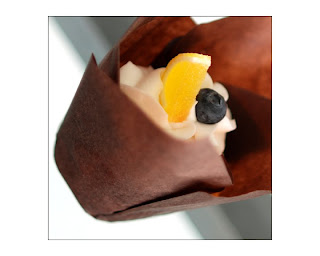 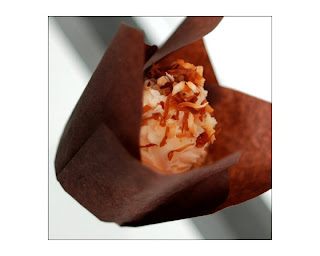 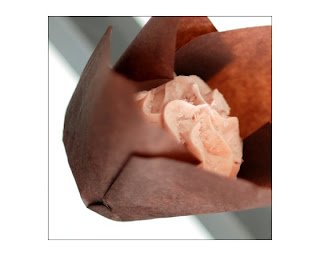 Tart lemon cake {a cheesecake filling can be added upon request} topped with sweet raspberry buttercream.

My mouth is watering just thinking about these...wow!

What is your favorite cupcake flavor?

Jade Cahoon
Sweet Street Designer Cakes and Cupcakes
Photos courtesy of Gene Ho - thanks again Gene for the great shots of my cupcakes!

Posted by Jade Cahoon at 22:12 0 comments Links to this post

It's
BACK TO SCHOOL!

And today I made 2 dozen cutesy sugar cookies for a teacher whose classroom's theme is frogs! 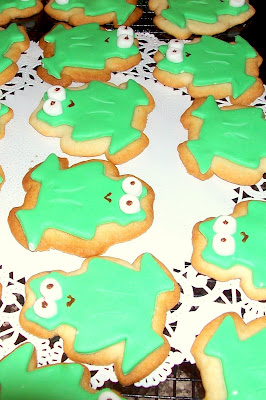 Orientation is tonight and she wanted to greet each child with their own little frog! 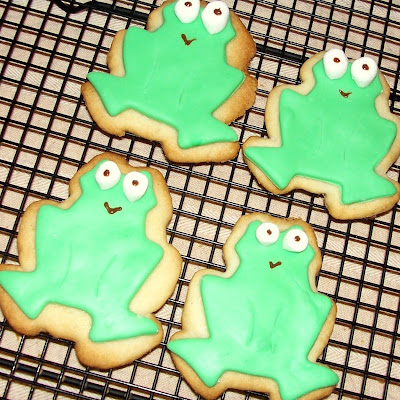 I hope both teachers and students have a wonderful first semester back at school! Only 18 weeks 'til Christmas! (wink,wink)

Posted by Jade Cahoon at 11:17 0 comments Links to this post 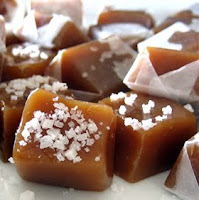 Announcing the newest addition to 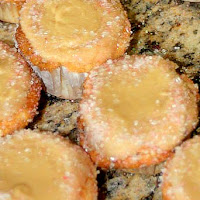 This is a classic candy combination that I had to try in cupcake form- from the smooth, decadent caramel frosting to the crunch of sweet sugar and Bahamian Pink Sea Salt. It's the perfect treat that will hit different spots on your palate for sure!

I had a taste test of these tonight with a local Bunco group and recieved rave reviews! After seeing their reactions, I knew it had to be added to the menu tonight! Place an order for a dozen at sweetstreetsc@aol.com. 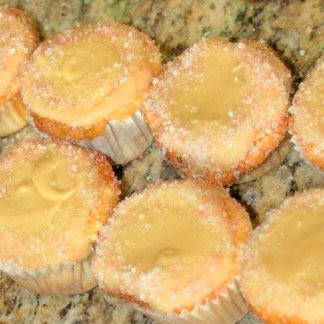 Posted by Jade Cahoon at 22:58 1 comments Links to this post

This past weekend, two very special people had big birthday bashes! Lucky for me, I was able to be apart of them both! 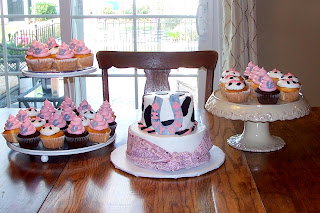 The beautiful Hayden turned 5 and wanted to celebrate Cowgirl style! I created a two tier, alternating Vanilla Bean and Moist Chocolate cake decorated in Marshmallow Fondant cow print. The horseshoe was also made of my homemade fondant and the bottom tier was wrapped in this gorgeous pink bandanna fabric I found. 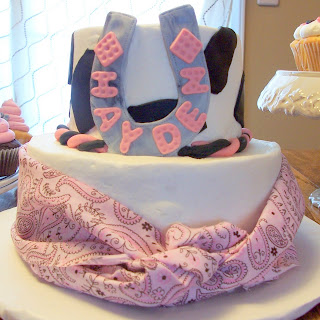 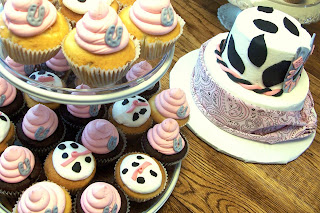 36 cupcakes accompanied her cake...flavors included Plain Jane, Chocolate Fudge and Strawberry Shortcake. Each mini cake was embellished with either a fondant horseshoe or cow print and bow.
Beached Turtle 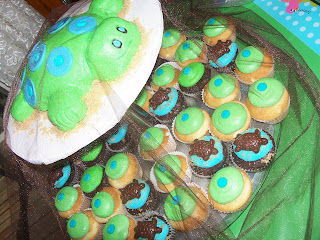 Little Liam turned 1 on Saturday! His mom and family put together the cutest turtle themed party to celebrate! The topper was Vanilla Bean cake, hand-carved into a turtle shape. This was my first turtle and I must say, I thought it turned out just as cute as can be. Although it was frosted in my Vanilla Buttercream, the details were Marshmallow Fondant. 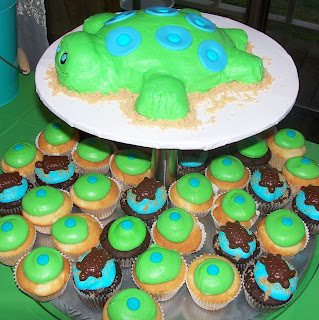 42 cupcakes were served to Liam's friends and family and flavors included Plain Jane, Chocolate Fudge and Vanilla Bean with Chocolate Fudge filling. They were topped with either milk chocolate shaped turtles or candy circles. 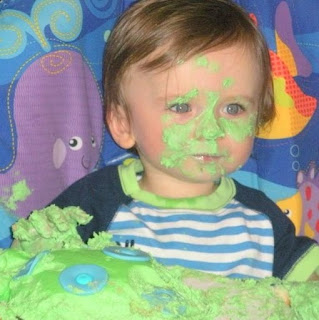 Both cakes were of themes I hadn't done before and I had such a great time planning as well as creating both party centerpieces! Thank you so much for allowing me to be apart of your big day...and most of all
HAPPY BIRTHDAY!!!
Jade Cahoon
Sweet Street Designer Cakes and Cupcakes

Posted by Jade Cahoon at 22:01 0 comments Links to this post

My Visit to Cupcakes Nouveau

A few weeks ago my husband, some friends of ours and I headed south to Miami, FL! Before we boarded our cruise ship and sailed to the Bahamas, they all agreed to make a special stop just for me! 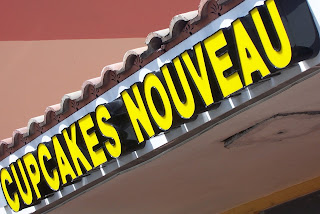 I'm sure by now everyone in the cupcake world has watched at least one episode of "Cupcake Wars" on the Food Network. Well, one night while I was cheering on my favorite cupcake team, I noticed one was from Miami! That moment I "facebooked" my friend telling her we HAD to fit them in on our trip!! 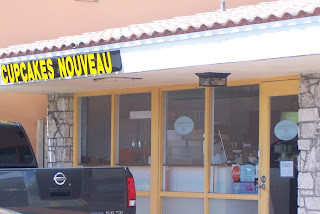 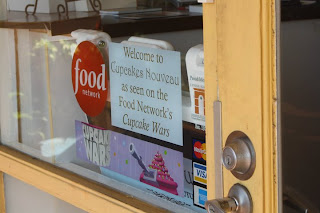 This little store front at the end of a simple shopping center is home to Cupcakes Nouveau- a Miami favorite that recently reached celebrity status after their T.V. appearance. We arrived as the doors were being unlocked by staff and immediately caught the familiar whiff of sweet buttercream and baking cake. 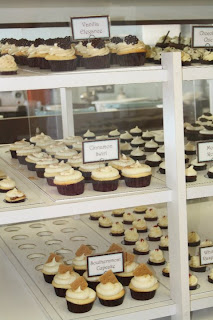 I ordered the Key Lime Pie:
A dense vanilla cake filled with tart lime curd that was topped with sweet cream cheese frosting and a graham cracker.
{By far, the best out of the 3! The cake tasted fresh, the curd was of tart perfection and the frosting was sweet and creamy! I could eat another of those right now, actually! Hehe!} 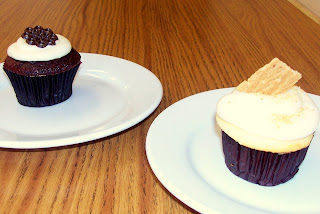 My husband ordered their version of Red Velvet:
Cocoa cake topped with sweet cream cheese frosting and a chocolate flower.
{By far, the worst of the 3! The cake was D.R.Y. I'm not sure if it was just over-baked...or maybe we just got a day old, but it was not the red velvet cake I'm use to. I like moist cake with hints of buttermilk and a little cocoa...this cake was not that, nor was it red as you can see in the photo above.}
Our friends ordered the Chocolate Chic:
Dark chocolate cake filled with almond cream and topped with vanilla buttercream, caramel and chocolate drizzles and a chocolate straw.
{This cake was right in the middle- not fabulous, but certainly not bad either! The almond was a nice touch with the chocolate and vanilla, but I still wasn't impressed with the dense cake. I guess we just all have our favorite recipes!} 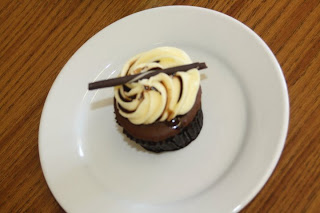 Everyone was nice enough to let me taste theirs (don't I have the best friends and family!?!) Thank you guys for making that extra stop!
I had a blast hanging out and trying cupcakes at Cupcakes Nouveau! The staff were as sweet as their treats (we even got the chance to watch them as they worked) and the Key Lime Pie was the perfect pick me up before heading out to sea!
Jade Cahoon
Sweet Street Designer Cakes and Cupcakes

Posted by Jade Cahoon at 09:13 0 comments Links to this post

I am first and foremost a momma to my energetic 4 ear old son, Mason James, and my new baby girl, Alice Christine and wifey to my awesome hubby {who is, by the way, the best taste-tester a girl could ask for!} But, I'm also a classically trained chef who fell in love with the art of cake design...and just so happens to have a MASSIVE sweet tooth! sweet babies. a cupcake company was born from that passion and has graced many special occasion dessert tables including weddings all over SC. This blog is an outlet for me to share tips, recipes, pictures and party ideas. So, come join me on this wild and {sometimes} sweet ride I like to call life!

I Love Hearing From fellow sweet-a-holics!

Wanna Stalk Me? It's super fun! 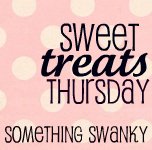 About sweet babies. a cupcake company

I've built my company on the belief that everyone deserves a "moment" now and again...and Gourmet Cupcakes are perfect for that! They are scratch made using the freshest ingredients found in the area, including whole milk and cream, real butter and vanilla, as well as ripe fruit, Ghirardelli chocolate and imported coffee. Each cupcake is made especially for you and your event and can be customized to fit any theme (including flavor.) My gourmet cupcakes are sold by the dozen. Full menu and pricing can be found here. Place orders for South Carolina weddings, birthdays, showers and other special occasions at sweetbabymasonjames@gmail.com. My awesome treats can also be ordered and shipped all over the US from HERE.

I'm Ecstatic To Be Featured!

My Most Favorite Blogs

Get your search on!